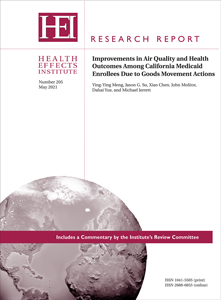 A new HEI Research Report by Ying-Ying Meng at the University of California, Los Angeles, and colleagues examines the impact of the 2006 California Goods Movement Plan on air quality and healthcare utilization among adults with chronic health conditions who were enrolled in California’s health care program for low-income individuals (Medi-Cal). The study was funded as part of HEI’s Accountability Research program, which evaluates the effectiveness of air quality interventions.

In HEI Research Report 205, Improvements in Air Quality and Health Outcomes Among California Medicaid Enrollees Due to Goods Movement Actions, the investigators compared changes from the pre-policy period (2004–2007) to the post-policy period (2008–2010), when a series of actions to reduce air pollution from the movement of traded goods had been implemented. They tested effects in three areas based on proximity to major goods movement transit routes: areas near freeways with truck traffic, near freeways without truck traffic, and control areas not near freeways. Results from this study demonstrated that actions to reduce emissions related to goods movement may be effective in improving local air quality levels and healthcare utilization among disadvantaged people.