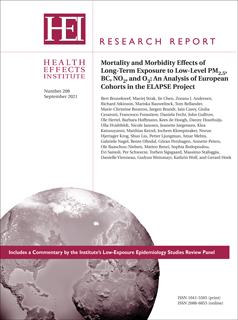 In the report, the investigators describe the development of new exposure models for all of Europe for four pollutants: fine particulate matter (PM2.5), black carbon (BC), nitrogen dioxide (NO2), and ozone (O3), as well as PM2.5 particle composition.

Bert Brunekreef at the Institute for Risk Assessment Sciences, Utrecht University, the Netherlands, and colleagues reported that exposure to PM2.5, BC, and NO2 showed significant associations of air pollution exposure with natural-cause, cardiovascular, respiratory, and lung cancer mortality. They also reported that they did not find positive associations between O3 and all causes of death examined.

This study contributes evidence of significant associations between exposures to relatively low levels of air pollution over many years and several important health  outcomes.

The study was funded through the HEI program Assessing Health Effects of Long-Term Exposure to Low Levels of Ambient Air Pollution (RFA 14-3). Two North American studies were also funded by this program, examining low levels of ambient air pollution in the United States and Canada. Initial results were published in 2019 and Phase 2 results are under review.