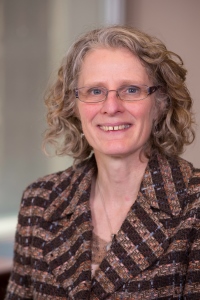 Annemoon van Erp joined HEI in 1999 and has been involved in research oversight and review of projects on diesel emissions and fuel additives, as well as accountability (evaluating the effectiveness of interventions to improve air quality and public health). She played a role in overseeing the Advanced Collaborative Emission Study (ACES) to test 2007-compliant heavy-duty diesel engines and reviewing the National Particle Component Toxicity initiative and the Multicenter Ozone Study in Older Subjects. She managed the annual Walter A. Rosenblith New Investigator Award for many years and played an active role in managing HEI's websites and communications strategy. She currently serves as Acting Director of Science after the retirement of Dr. Rashid Shaikh, Director of Science.

Van Erp has played an active role in the Society of Toxicology where she served as secretary of the Inhalation and Respiratory Specialty Section. She was a consultant to WHO during its 2013 review of evidence on health aspects of air pollution – REVIHAAP Project, in particular its section on intervention/accountability studies. She was also involved in a Cochrane systematic review “Interventions to reduce ambient particulate matter air pollution and their effect on health.”

Before joining HEI she was a Research Assistant Professor at Tufts University, where she studied mechanisms by which alcohol consumption affects neural mechanism that regulate behavior, using in vivo microdialysis to measure neurotransmitter levels in brains of freely moving animals. She received a B.Sc. and M.Sc. in biology and a Ph.D. in psychopharmacology from Leiden University, the Netherlands.