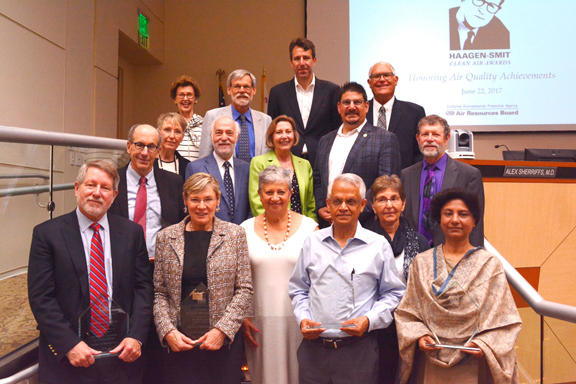 HEI President Dan Greenbaum (pictured in second row, first on left) has received a 2016 Haagen-Smit Clean Air Leadership Award from the California Air Resources Board (CARB). This honor, as explained on CARB’s website, is conferred annually on “extraordinary individuals to recognize significant career accomplishments in at least one of these air quality categories: research, environmental policy, science and technology, public education and community service.”

In selecting Greenbaum as a recipient, CARB commended his having “led HEI’s efforts for over two decades to produce and communicate — for decisions first in the U.S., then in Europe, and now worldwide through the Global Burden of Disease and the State of Global Air report and website — high-quality, relevant, and credible science on the health effects of particulate matter, ozone, air toxics, and many other air pollutants.”

As part of a June 21 awards ceremony, held at the headquarters of the California Environmental Protection Agency in Sacramento, Greenbaum gave an educational talk to a diverse audience of CARB experts and stakeholders describing HEI’s model for producing trusted science, its mission and impact, and its current projects. The awardees were pleased to have Governor Jerry Brown join them at the reception following the awards.

The award was named for Arie Haagen-Smit, an atmospheric chemist known by many as the "father" of air pollution control, who first identified what causes smog and served as CARB’s first chair when the agency began in 1968.