Estimating the burden of disease from air pollution in India 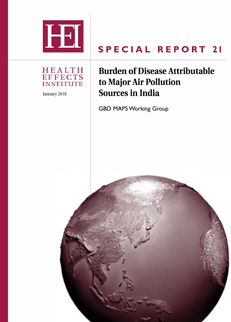 India has some of the highest levels of outdoor air pollution in the world. The most comprehensive air pollution estimates available from both satellite and Indian ground-level measurements of fine particulate matter indicate that 99.9% of the Indian population is estimated to live in areas where the World Health Organization Air Quality Guideline for fine particulate matter was exceeded in 2015, contributing to some 1.1 million deaths in India in 2015. Special Report 21, Burden of Disease Attributable to Major Air Pollution Sources in India, provides the first comprehensive analysis of the levels of fine particulate matter air pollution in India by source at the state level and their impact on health. It is the result of the Global Burden of Disease from Major Air Pollution Sources (GDB MAPS) project, an international collaboration of the Indian Institute of Technology (Bombay), HEI, and the Institute for Health Metrics and Evaluation (Seattle, WA). The analysis shows that household burning and coal combustion are the single largest sources of air pollution-related health impact, with emissions from agricultural burning, anthropogenic dusts, transport, other diesel, and brick kilns also contributing significantly. Using three different scenarios projecting out to the year 2050, the study identifies in detail the challenges posed by the many sources of air pollution in India, but also highlights the significant progress that can be made.