Members of HEI’s Global Burden of Disease Major Air Pollution Sources (GBD MAPS) Working Group met at the Indian Institute of Technology Bombay (IITB) on January 18 and 19. Participants in the meeting, hosted by GBD MAPS collaborators at IITB’s Interdisciplinary Program in Climate Studies, included Working Group members from India, China, the United States, and Canada. The scientists reviewed the most recent estimates of emissions from major sources of air pollution in India and preliminary estimates of their contribution to current and future PM2.5 levels. These data will be combined with estimates of the Indian burden of disease attributed to PM2.5 (compiled through the efforts of the parent GBD project; see HEI Update, Fall 2014) to estimate, under a range of policy-relevant scenarios developed by the Working Group, the burden of disease from major air pollution sources in India in 2015 and in 2050. HEI expects to issue a report of these new estimates in early 2017.

The first GBD MAPS report, Burden of Disease Attributable to Coal-Burning and other Major Sources in China, is now under review and an Executive Summary will be released this spring. GBD MAPS estimates will also be featured in an HEI-organized symposium, “The Burden of Disease from Air Pollution,” at the February meeting of the American Association for the Advancement of Science. 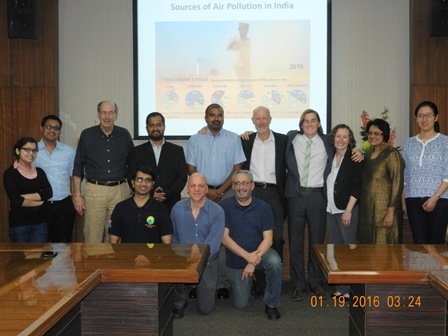